There has been a lot of quiet from NEAR Protocol’s [NEAR] end lately. In an awakening call, NEAR seemed to have heeded the shouts for an update.

In an official announcement on 12 September, stablecoin,  Tether [USDT] announced that it was joining forces with NEAR in what seemed like a push to help the NEAR project thrive.

In the wake of the development, NEAR recorded a 6.44% uptick against the stablecoin in the last 24 hours. According to CoinMarketCap, NEAR was also up in trading volume. At press time, NEAR’s 24-hour trading volume was a 51.87% increase, worth $622.20 million.

Meanwhile, the development could be in line with NEAR’s mission to deploy more projects in its ecosystem. After reaching 700 projects in July, NEAR tweeted about its objective of surpassing the  800 projects currently hosted on its network.

We are proud of growing together with the ecosystem, being granted and supported by @NEARProtocol 🤟🏻🤟🏻

Not near our expectations

Despite the development, the on-chain results of NEAR were not all impressive. According to Santiment, NEAR’s development activity had taken a downward turn since maintaining some stability on 10 September.

However, its total NFT volume did not seem capable enough to make up for the decrease. At press time, the total NFT trade volume of NEAR went down from $175,000 on 11 September to $107,000.

To make up for the loss in the metrics aforementioned, NEAR had an impressive performance across socials.  A look at its social dominance showed that it had moved from $0.587% to 1.053% with its price trading at 5.03. As for the social volume, it increased from 19 to 27 at the time of this writing.

Eyes on the action

While NEAR has been solid over the past day, concluding that it would take the same performance into the rest days may be catastrophic. Looking at the Relative Strength Index (RSI), NEAR had already reached an overbought level and reversed to a buying momentum point at 60.

With an increasing volume as revealed by its On-Balance-Volume (OBV), it is likely that NEAR gets overbought again and eventually succumbs to selling pressure. 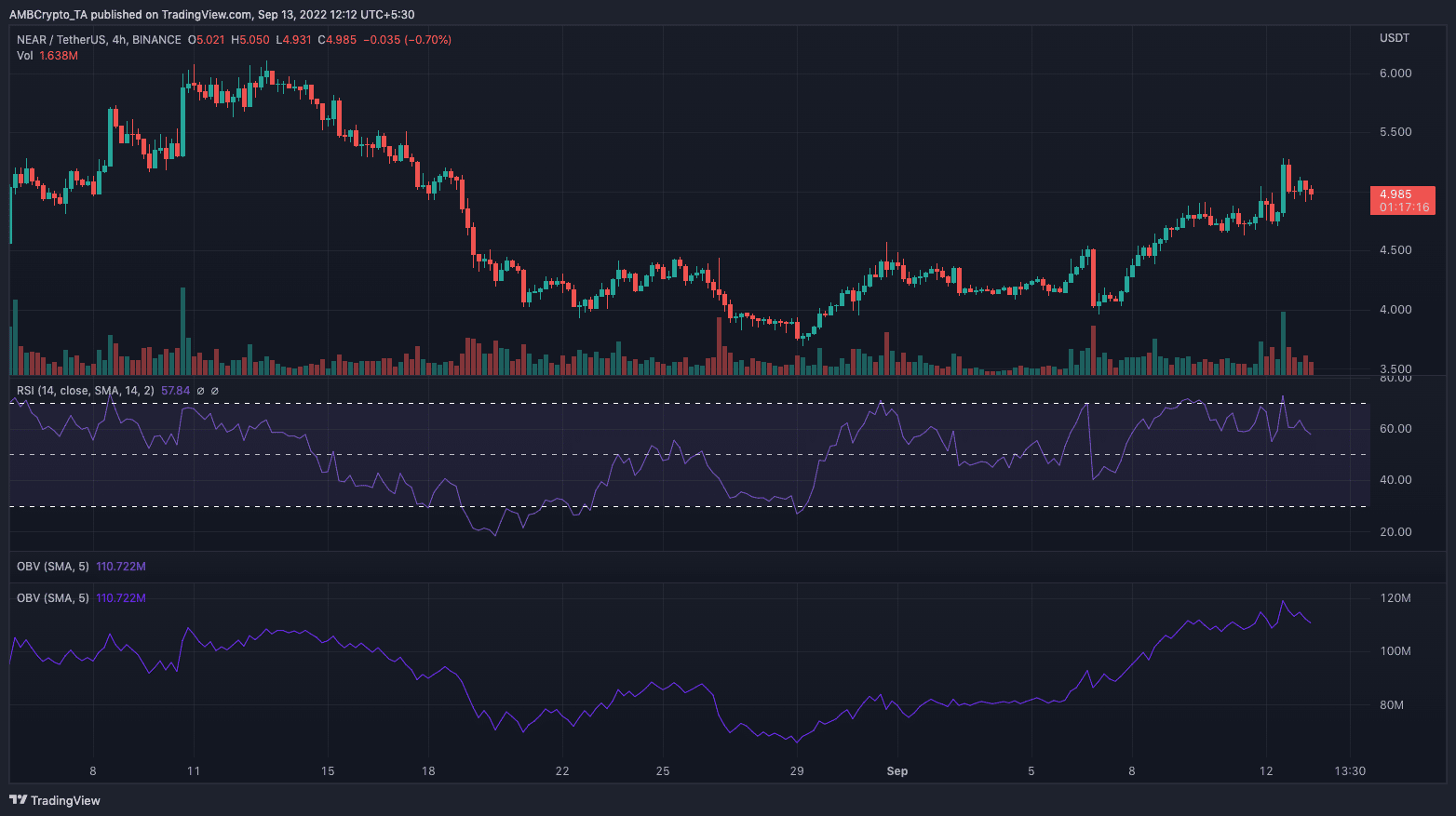 Hence, it could be in investors’ interest to keep eye on these indicators and not expect a continuous bullish momentum.

With the crypto market swinging between recovery mode and a pushdown, NEAR’s short-term movement could also go sideways.