Intel’s new Arc A380 graphics card has been put through its paces in multiple ways, with an interesting new one here: Ethereum mining on Intel’s new GPU.

The developer of Nanominer has added support recently for Intel’s new Arc GPU, where it’s been benchmarked with some Ethereum mining… performance wise the new Intel Arc A380 graphics card spits out just 10.2MH/s without any optimizations enabled. We’re looking at 75W of power which isn’t bad for power consumption, but performance wise the new Intel Arc A380 is worse than NVIDIA’s lower-end GeForce GTX 1660 series GPUs.

Sure, there’s 6GB of VRAM but the available VRAM for the A380 is 4832MB… this is an issue if the Arc A380 is your primary GPU and is busy (VRAM being consumed) running other things. If it’s dumped into a miner with other Arc GPUs, the 6GB of VRAM won’t be an issue… for the next few days at least. 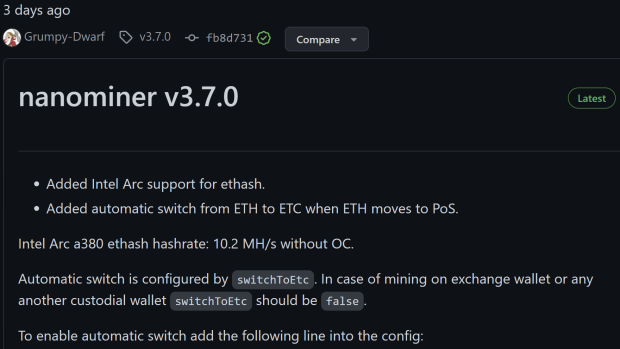 Ethereum shifts into Proof of Stake sometime between September 10 and September 20… so we’ve only got a few weeks, but then there’s the fact that crypto miners can move over to other currencies like Ethereum Classic (ETC).