Bitcoin’s (BTC) most successful hard fork Bitcoin Cash (BCH) is not having a good 2022. While most cryptocurrencies have seen their valuations drop drastically in recent months, the BCH/BTC rate has fallen to all-time lows in 2022.

Bitcoin’s leading cryptocurrency market position and growing popularity mean that it could continue its dominance over bitcoin cash for the near future.

In this article, we have compiled important information you need to know about bitcoin and bitcoin cash. You will also find historical price analysis of BCH to BTC price rates, and analyst view and price predictions.

Bitcoin vs Bitcoin Cash: What is BCH/BTC?

BCH/BTC is the price of bitcoin cash in terms of bitcoin.

What is bitcoin cash? Bitcoin cash (BCH) is arguably the most popular hard fork of bitcoin (BTC). It is currently (24 August) valued higher than other bitcoin hard forks.

Like bitcoin, BCH is a peer-to-peer electronic cash system that allows online payments to be sent directly from one party to another without going through financial institutions.

In 2017, the original bitcoin network split into two versions due to differences in ideologies within the bitcoin community. This resulted in the creation of a separate chain called bitcoin cash.

“While most of these chains have faded into irrelevancy, they did create billions of dollars of wealth for Bitcoin holders. People received these new tokens, which had a market value, and either chose to dump their freshly minted tokens for more BTC or decided to hold on to them in alignment with the vision,” said the Bankless newsletter in reference to numerous forks of bitcoin that emerged in 2017 alongside bitcoin cash.

A faction of bitcoin developers wanted to increase the block size of the bitcoin blockchain in order to enable the network to process transactions faster for less fees.

As a consensus to increase the network capacity wasn’t reached, the bitcoin chain was split on 1 August 2017.

“Fortunately, a large portion of the Bitcoin community, including developers, investors, users, and businesses, still believed in the original vision of Bitcoin – a low fee, peer to peer electronic cash system that could be used by all the people of the world,” read bitcoin cash’s website.

The main difference between the new and old chain is the block size. The BCH chain supports 32MB blocks, compared to 1MB blocks on the BTC chain.

BCH and BTC have several similar properties, including a hard cap of 21 million coins and using the proof-of-work (POW) consensus.

What is your sentiment on BCH/USD?

Give BCH/USD a try

“Bitcoin cash would be better for something like a cup of coffee, while a larger purchase, such as a car or house, may warrant a slower and more secure cryptocurrency like Bitcoin,” said Daniel R. Hill, president of Hill Wealth Strategies, in conversation with Forbes.

Since then the BCH/BTC price chart has seen a continued downtrend. The market capitalisation of BCH has fallen from its peak of over $66bn, reached in December 2017, to its current valuation (24 August) of about $2.5bn, as of 24 August 2022.

Meanwhile, bitcoin’s valuation has grown in the same period, rising from less than $300bn to its all-time high market capitalisation of over $1.27trn, reached in November 2021. 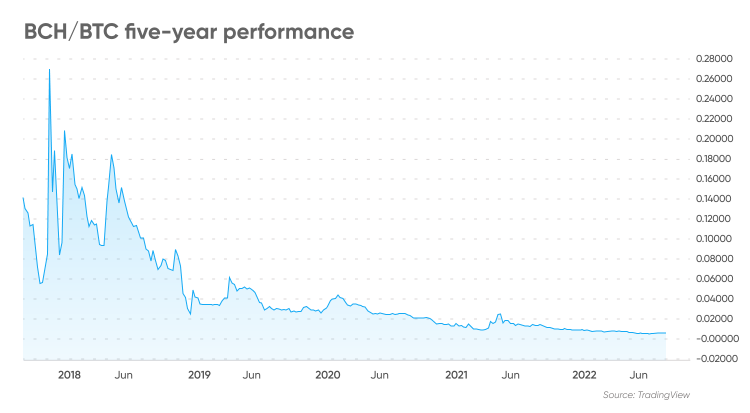 In 2022, a bear market engulfed the cryptocurrency sector which has pushed crypto valuations to multi-year lows. The bear market has primarily been driven by macroeconomic conditions.

Multi-decade high inflation in the US and various other parts of the world has forced central banks to shut off cheap liquidity and raise interest rates at an aggressive pace.

Risk asset markets of cryptos and equities have seen an intense sell-off in recent months. Investors are increasingly looking to economic data to get clues about the future pace of monetary tightening by the US Federal Reserve (Fed) and other global central banks.

“Of late, fiscal and monetary policy have been major drivers of bitcoin prices … The outburst of initial stimulus saw rising bitcoin prices, and its withdrawal saw prices retrace,” said a bitcoin company NYDIG.

Bitcoin Magazine said in its July monthly report: “The logical response from strained debtors is to sell anything with dollar liquidity in order to make good on said liabilities: stocks, bonds, bitcoin … anything to cover a short dollar position during a short squeeze (otherwise known as a liquidity crisis).”

“The correlation of BTC to equities is likely caused by a myriad of forces, mostly connected to BTC being viewed as a risk asset by professional investors, in addition to BTC’s relationship to general liquidity and monetary policy,” said Arcane Research.

Looking forward, the Fed is expected to hike rates further at a 20 September meeting.

“Bond markets are torn between a 50 bps and 75 bps hike at the FOMC meeting on 21 September. However, the futures market signalled a peak in the Fed Funds Rate at 3.50% this year into 2023, consistent with our view,” said economists of DBS Research.

With cryptocurrencies following the footsteps of market leader BTC, coins like BCH could trail BTC’s price action movement in 2022.

Blockchain research firm Delphi Digital published a note on 19 August 2022 suggesting that the BTC price could bottom around the end of November 2022, based on a study of historical bitcoin prices.

“It is also interesting to note that in both of the previous bear markets, BTC found its price floor after falling 85%. From our current, all-time high, an 85% decrease would translate to $10,000 BTC,” said Delphi Digital.

Note that analysts’ BTC price predictions and BCH price forecasts can be wrong. Forecasts shouldn’t be used as a substitute for your own research.

Always conduct your own due diligence and remember that your decision to trade or invest should depend on your risk tolerance, expertise in the market, portfolio size and investment goals. Never trade more than you can afford to lose.